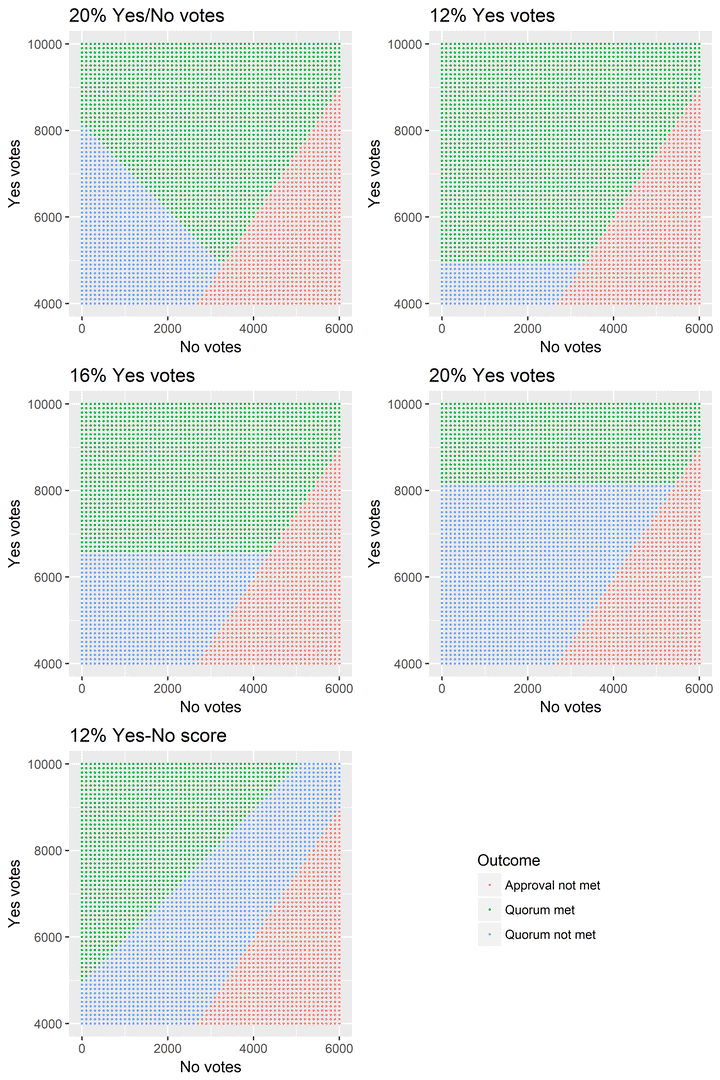 This piece considers how changing the way that the quorum requirement is defined for Politeia proposals would affect the outcome of proposal votes.

Currently, proposals must meet a quorum requirement to be approved - at least 20% of live tickets must vote Yes or No on the proposal.

I am in favour of changing the requirement so that it is defined in terms of Yes votes only. In scenarios where a proposal has a strong approval percentage but not enough votes to reach the quorum requirement, someone who did not wish to see it pass could be better off not voting than voting No, because their No votes would be unlikely to push the approval percentage below 60 but would help it to reach the quorum requirement. I think it would be worthwhile to remove this potential barrier to voting no, so that we might get a better signal of what stakeholders want.

I have mocked up a data-set with evenly spaced proposal outcomes and used it to illustrate how the current quorum requirement works, along with 3 variants using a cut-off based on Yes votes only. I used 40,960 as the number of eligible tickets.

Each point on the graph below is a (dummy) proposal, and the color reflects its outcome. The red points are proposals that would be rejected for not reaching 60% approval, these are the same in each scenario because no change to the approval percentage is being considered. Blue points are proposals that reached the 60% approval rating but would be rejected for failing to reach the quorum requirement.

So far, the results for proposals that have finished voting are mostly well outside the space considered above, because they have tended to exceed the quorum requirement by some distance. The only historical proposal outcome that would have changed as a result of adopting any of the thresholds considered here is the tutorials proposal, which with 7,800 Yes votes at the end would have failed to meet a quorum requirement of 20% of eligible tickets voting Yes.