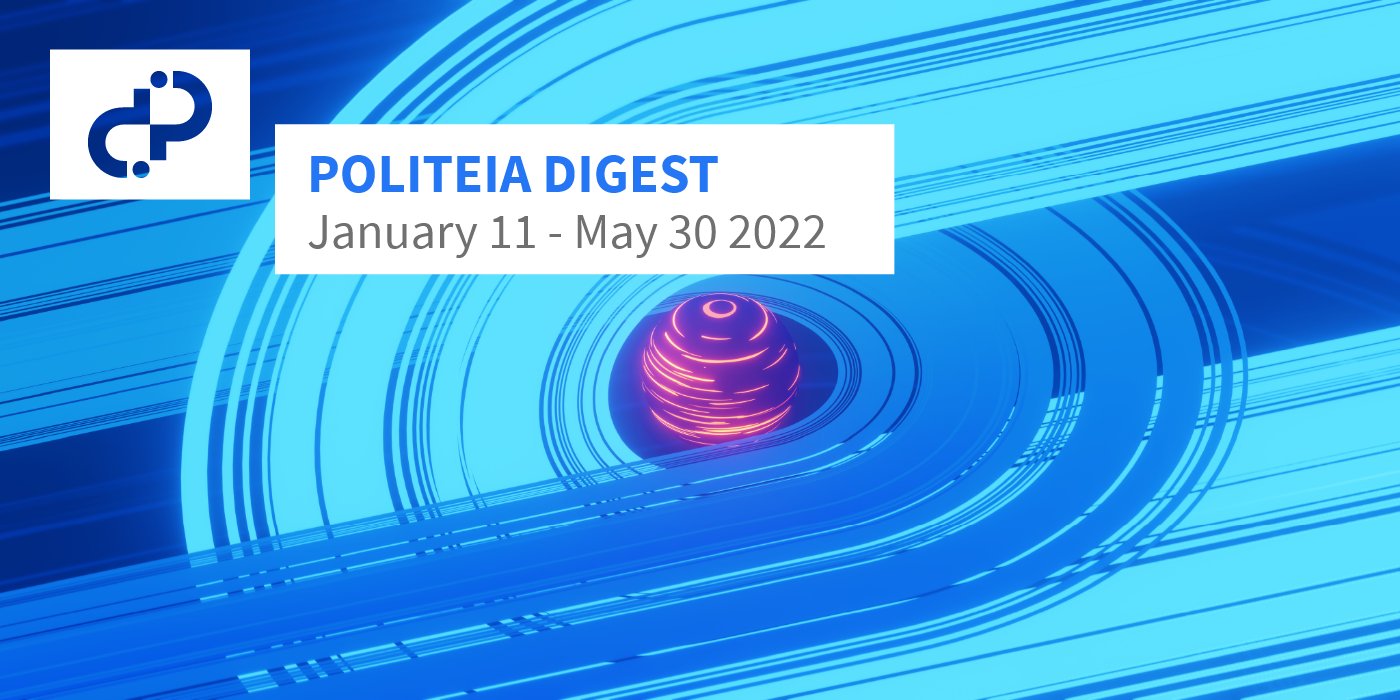 Published 21 May by exitus | 6 comments

The Decred Journal team are back with a new proposal. After the old proposal ended at the end of 2021 the Decred Journal and Politeia Digest have been unfunded for five months, and inactive for most of that time. @exitus has bee instrumental in the return of the Decred Journal for an (unfunded) April issue, and now this proposal. The proposal requests funding of $33,000, which would cover 9 months of the Journal at max $3,000/month, and also 9 months of Politeia Digest at max $550/month - there is an additional $1,000 set aside to pay the contributors to the April 2022 Journal issue.

The comments on the proposal are all happy to see the return of the Journal.

Published 22 May by jholdstock | 5 comments

This proposal requests a maximum budget of $105,000 to fund 18 more months of the Bug Bounty program (formerly administered by @degeri). The budget is split into operating costs ($5,000) and reward payments ($100,000). Since the program started in Jany 2019 over 200 bug reports have been processed and 21 security vulnerabilities have been fixed as a result. A total of $10,154 has been paid to reporters since the program started, and operating costs for the previous year were $2,087.50.

@degeri left a comment to say they need to focus on IRL matters after the current proposal ends and therefore wish to pass responsibility on to @jholdstock. All of the comments are supportive of the proposal.

This proposal requests a budget of $3,575 to run three events at Universities in Uganda in summer of 2022, with an expectation that 30 people would attend each event. After being questioned about whether they have organised this kind of event before in #proposals, an event in 2019 organised by one of the proposal team was referenced.

Published 27 May by kozel | 1 comments

This proposal requests funding of $20,000 to continue covering the same translation tasks as previous phases, with the same team, for the rest of 2022. The remit covers Decred Journal, the decred.org site, articles/video content and software text. The proposal reports that the previous phase was completed under budget (costs were $8,180 against a budget of $33,000).

This proposal to continue funding Politeia development requested a budget of $138,600, which will cover 4-6 months of development work. Planned work for this phase is described for the back and front end. On the back-end this includes importing legacy proposals (4 weeks), and plugins for user authentication (8 weeks), user identity (4 weeks), user notifications (3 weeks), and DCR payments (6 weeks). The roadmap for frontend development includes slightly more work, it is set to deliver plugins for records and ticketvotes (4 weeks), users (6 weeks), comments, (6 weeks), payments (7 weeks), and also plugin integration (4 weeks) and pi-ui maintenance (2.5 weeks). The budget includes a further 8.5 weeks of other tasks like bug fixes and UX improvements.

This proposal requested $32,000 to continue video production for 2022 by the same team (@exitus, @DecredSociety, and @karamble).

This proposal requested a budget of $370,000 to continue development of DCRDEX for around another 9 months. The work summary includes the following major points: maintenance and support (35% of efforts), Fidelity bonds (13%), Mixed account support (4%), BTC swap acceleration (4%), finalizing ETH support (6%), and planning and prototyping of DCRDEX evolution (20%).

This proposal requested $1,684 for work done on the bot since the last phase, and for hosting and support costs for 2022.